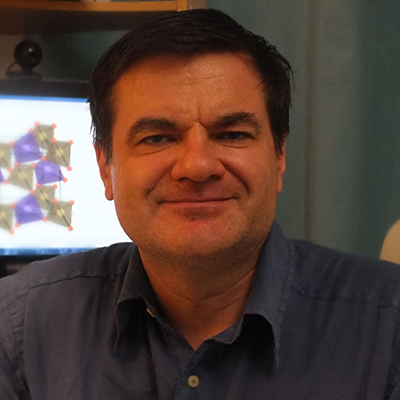 Vladislav A. Blatov was born in 1965 in Samara (former Kuibyshev), Russia. In 1987, he graduated from Samara State University (SSU) and then received degrees of Candidate (1991) and Doctor in Chemistry (1998) from the Institute of General and Inorganic Chemistry (Moscow). He is Full Professor at the SSU Chemistry Department since 1998, organizer and director of the first Samara Center for Theoretical Materials Science (SCTMS) at SSU since 2013. He becomes an Adjunct Professor at School of Materials Science and Engineering, Northwestern Polytechnical University, Xi’an, China in 2016. In 2018, he organized and headed the SCTMS at Samara State Technical University. His research and educational interests concern geometrical and topological methods in crystal chemistry and their computer implementation.

He is the main developer of the program package TOPOS (later renamed to ToposPro) since 1989. He invented many original algorithms of crystal structure analysis and searching for correlations in crystallographic data. Now he works under development of first knowledge databases and expert systems in crystal chemistry and materials science. He was a tutor and organizer of more than 10 international schools devoted to the ToposPro methods. In 2016 he was recognized by Thomson Reuters as the most cited Russian researcher in chemistry.