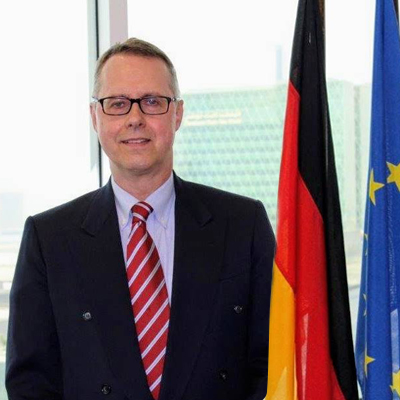 Ambassador Fischer is a career diplomat who joined the Federal Foreign Office in 1986. His professional path has focused on economic and global issues. He has worked at the Federal Foreign Office in Berlin, including as head of the environmental department and as chief economist, at the Office of the Federal President as foreign policy advisor and at German missions in Washington, DC as head of the economic department, in Tel Aviv as deputy ambassador, as well as in London, Shanghai and Singapore. Ambassador Fischer was seconded for a year to the British Foreign and Commonwealth Office, where he worked on EU enlargement. He also spent several months on secondment to the office of the French Minister for European Affairs.

He holds master’s degrees in history/political science from the Free University of Berlin and government/international relations from Georgetown University, which he attended on a Fulbright Scholarship. He also studied at “Sciences Po” in Paris on a scholarship awarded by the German Academic Exchange Service.

He is married to Maria del Carmen Fischer. They have two adult children.