Ambassador of Switzerland to the United Arab Emirates and Bahrain 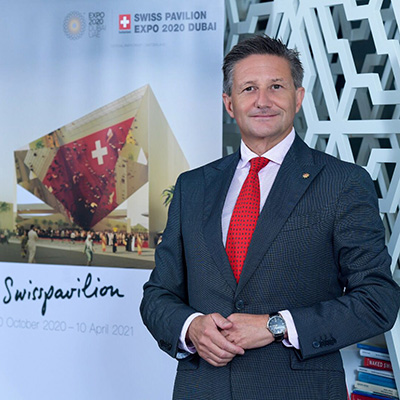 Massimo Baggi was born on 23 April 1964 in Locarno (in the Italian-speaking part of Switzerland).

He holds an MBA in Economics from the University of Zurich (1988).

He then became a research assistant at the Graduate Institute of Public Administration at the University of Lausanne (1989-1990) and completed his academic studies with a diploma training program at the Faculty of International Relations at the University of Geneva. (1993). From 1991 to 1992, he was assistant director of the Institute of Economic Research at the University of Italian Switzerland. In 1992 he joined the Swiss diplomatic service in Bern. After a training period at the Swiss Mission to the UN in New York, he was posted to the Swiss Embassy in London. From 1994 to 1998, Massimo Baggi held the post of Diplomatic Collaborator for European Integration Issues in the Federal Department of Foreign Affairs and the Federal Department of Economic Affairs in Bern. From 1998 to 2003, he was an advisor in charge of economic affairs at the Swiss Embassy in Delhi before taking up the same position at the Swiss  Embassy in Moscow between 2003 and 2006.

Back in Switzerland, Massimo Baggi is head of the Asia and Pacific Division at the State Secretariat for Economic Affairs (SECO) until 2010. He then acts as Consul General of Switzerland in Milan until the end of the World Expo, in 2015.